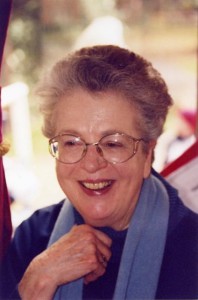 Anne’s early professional life did not suggest that children’s literature would become her great love and her professional focus. Anne was born in England and emigrated to Australia with her parents in 1950, arriving here not long after her 13th birthday.  After leaving school she began nursing training, first in Sydney and then in Melbourne following her family’s move there. She didn’t finish the full training, however, as she married and, as was the rule then, was required to leave. She qualified as a nursing aide and worked as a nurse/receptionist, until the birth of her first child. When her four children had all started school, she went on to study teaching at the then State College of Victoria in Coburg from which she graduated at the age of 38 in 1976. She had found her real forte and went on to study for a Graduate Diploma of Librarianship, subsequently working as a teacher/librarian. All of this was done at a time when there was very little social support for working mothers. By 1980, however, she had returned to Coburg on secondment to teach children’s literature and language method. Demonstrating the love of learning which was so characteristic of her, Anne went on to undertake both a BEd and an MEd at Latrobe University.  The State College of Victoria at Coburg was changing too, becoming Phillip Institute and subsequently part of RMIT University. Anne remained employed there, becoming a senior lecturer, until her retirement. During that time she inspired countless students with her love for and knowledge of children’s literature.

The title of Anne’s MEd thesis: An examination of the nature and purpose of “approved” Aboriginal dreaming stories published for children, and of the basis on which such stories are approved for use in schools gives an indication of another of Anne’s concerns. She was keenly interested in Indigenous Dreaming stories and the way these stories could be used legitimately and with cultural respect. She was convenor of the 1993 children’s literature pre-conference institute ‘The Dreaming and Beyond: Literature for the World’s Children from Aboriginal Australia’ which ran prior to the Australian Reading Association’s First International Conference held in Melbourne. She was also on the program committee for the main ARA conference.

Her involvement in the world of literature for young people went far beyond her teaching, however. She was the inaugural President of the Dromkeen Society, a position she held for three years. During that time she worked closely with the Society committee members, leading the important activities held at Dromkeen such as the annual Dromkeen Dinner, open days and other literary events held there. Her gracious hosting of such events was legendary.

The Children’s Book Council of Australia was another important part of Anne’s professional life. She contributed to the organisation in a number of ways over many years. Between 1982 and 1989 she served as either Vice President or President of the Victorian Branch of the CBC.  When the National Executive of the CBCA was based in Melbourne in 1993-1994, Anne was elected National Secretary. All of those on the National Executive benefitted from her wise counsel in this role. During that time, the Second National Conference of the CBCA was held in Melbourne and Anne was part of the organising committee for that event.

Anne was an author and editor of renown as well. She has a formidable publication list. As well as reviewing children’s literature in a variety of journals, she edited collections of stories and poems for children, was co-editor with Margot Hillel of Celebrate!  a selection of extracts from winners and honour books to celebrate the 50th birthday of the Children’s Book Council of Australia, published articles in professional and scholarly journals on using children’s literature and interviews with authors.