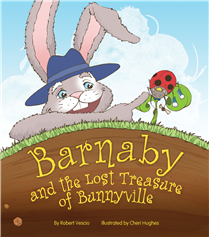 Barnaby the bunny wants to plant seeds and grow fruit rather than just dig in the ground. When the Mayor of Bunnyville hears of this he scoffs that “Bunnies dig” and forbids any rabbit to grow anything. To overcome this edict, Barnaby devises a scheme involving a fake treasure map to encourage all the rabbits into digging and then he uses the abandoned holes to plant his seeds and trees. When Barnaby takes his crop to market the other bunnies are delighted and surprised by the abundance of fruit and vegetables. Barnaby explains that the real living treasure is to unlock the earth’s treasures. He is rewarded for his innovation and insight by being made Deputy Mayor and named as Bunnyville’s greatest treasure hunter.

Told in simple, accessible language complemented by bright, colourful illustrations, Barnaby and the Lost Treasure of Bunnyville advances the cause of sustainability to readers in the pre-school to lower primary age groups. The interest in horticulture is further encouraged by the endpapers bearing named illustrations of a large variety of different seeds. The text conveys a worthy environmentally friendly message promoting a love of the earth and the growing of our own fruit and vegetables.

Teachers Notes can be found on the Big Sky Publishing website.